From Staci via email:

I’m desperately trying to get the word out about the dangers of using Harts. Until Friday, I had never heard about how dangerous Hartz flea drops are. Three weeks ago, I applied Hartz Ultraguard to both of my cats. Soon after, my 12 year old, Jackson started having strange leg spasms. It was like something was shocking him, and he would take off running. Then he stopped eating and became lethargic. I thought he had grown tired of his food, so I tried several different brands. He would take a few bites and stop. Then he started drinking a lot of water. The weight loss was rapid. When we took him to the vet on Friday morning, I expected to hear that he was diabetic. Instead we were told that he was in acute renal failure and severely anemic. The vet explained how many animals that she had personally seen die from Hartz flea medicines. I had no clue that buy switching to Hartz to save a buck, would cost me my furbaby. There was no hope of recovery. We took him home so that the kids could say goodbye when they got home from school. A little before 5pm, he took his last breath. Now my spunky 16 year old healthy bobtail is showing some scary symptoms. She had become very vocal tge night after the application, but I didn’t make the connection. Now she’s vomiting everything she eats and is starting to drink a lot of water. I will be taking her to the vet, today, and praying for the best. I’ve filed complaints with the EPA. I’m plastering Hartz Facebook with my story and pictures of my baby. Why isn’t this on the news? Most people are completely unaware that they could be killing their beloved pet. How can we get the word out? How can we make sure that Hartz is held accountable? My heart is broken because I unwittingly killed my baby. I don’t want anyone else to go through this. 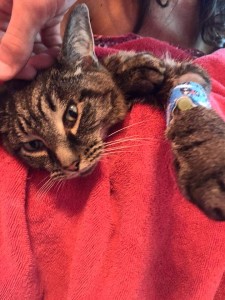 101 Replies to “My cat just died because of Hartz”