From Dannielle via email:

“My family & I have been battling fleas all summer. We tried frontline, vaccuming everyday, baths, combing… You name it we tried it. I came across the Hartz ultra guard flea collar & said what the heck I’ll give it try (unaware of the dangers) I didn’t even think it would work. I have 3 cats & put the flea collars on all 3.. They had them on for a couple of weeks & I even brushed them out Sunday November 9th. Everything looked okay and normal, until Wednesday November 12, 2014. I woke up and it was a busy morning I was running to go get something out of my sons room when I looked down at my precious Siamese and seen red under his collar! I immediately took the flea collar off… And under neath was a big chemical burn on his neck!!!! I am so furious this product hasn’t been recalled. I am about at my wits end with fleas & this just tops it off. Thankfully my Siamese seems to be ok & I am taking care of his wound! I feel so sorry for the victims who have lost there animals. I hope something can be done about these Hartz products!”

From Jane via email: 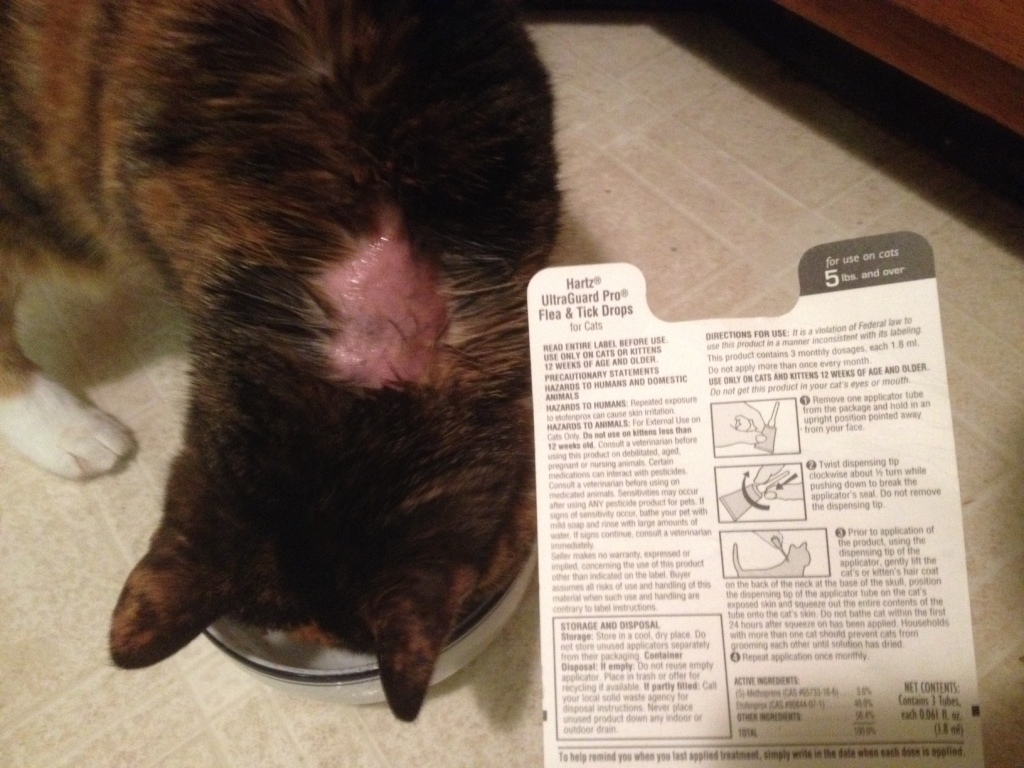 NRDC Petition to Protect Dog and Cat Loving Families Denied
WASHINGTON–(ENEWSPF)–November 7, 2014 – In a major public health setback that will allow pet product companies to continue use of a hazardous neurotoxin called tetrachlovinphos (TCVP) in flea control products, the U.S. Environmental Protection Agency today denied Natural Resources Defense Council’s 2009 petition seeking to cancel all pet uses of the toxic chemical TCVP because of the risks to kids.

“EPA continues to put the cognitive development of millions of pet-loving kids at risk. Unfortunately, EPA has once again relied on faulty assumptions and extrapolations that don’t reflect the vulnerability of kids.

“Brain and nervous system-harming chemicals, like TCVP, are too dangerous to have in our homes, on our pets, and around our kids. Allowing them to stay on the market based on shoddy assessments is irresponsible. Families shouldn’t have to worry about the products available at their local pet store. EPA’s failure to protect kids is unacceptable.”

In light of EPA’s failure to protect kids, pet-loving families will need to watch out for toxic pet products on the shelves. NRDC’s guide can help pet owners choose safer options and pet stores like PetCo and PetSmart can protect their customers by ensuring the safety of merchandised products. NRDC continues to evaluate EPA’s response to its petition.

Background
In February 2014, NRDC filed a lawsuit in federal court against the EPA seeking the agency to respond to NRDC’s petitions to cancel all manufacturer registrations and uses of neurotoxic pesticides propoxur and tetrachlorvinphos (TCVP) used in popular pet flea treatment products. Due to concerns that the products can harm children’s more vulnerable developing brains and nervous systems, the agency severely restricted household use of other known neurotoxic pesticides. Sergeant’s Pet Care Products, Inc., Wellmark International and Hartz were among flea collars brands that NRDC called out for use of these hazardous chemicals.

Spurred by NRDC’s 2009 petition and 2014 lawsuit filing, in March 2014, EPA announced an agreement with Sergeant’s Pet Care Products, Inc. and Wellmark International to cancel the use of propoxur in flea collars due to risk posed to the brain and nervous systems of kids – but did not address related use of other dangerous chemicals, including TCVP.

Prior to NRDC’s February 2014 lawsuit filing, EPA failed to respond to NRDC petitions seeking a ban on these two chemicals. NRDC first petitioned EPA to cancel propoxur uses in pet collars in 2007. For TCVP, NRDC filed a petition in April 2009 to cancel all pet uses of TCVP based on research and the findings in its Poison on Pets II report, which found unsafe levels of pesticide residues on dogs and cats after a flea collar is used. Residue levels detected in this study were found to be high enough to pose serious risks to the neurological system of children at levels that greatly exceed EPA’s acceptable levels.

The Natural Resources Defense Council (NRDC) is an international nonprofit environmental organization with more than 1.4 million members and online activists. www.nrdc.org and follow us on Twitter @NRDC.