This was a few years ago, we had been using flea shampoos and decided to try the drops. We went to the store and bought some Hartz drops not knowing all the dangers, to put on our 2lb chihuahua and my 2 large cat about 6lb-15lbs and my kitten who was about 15 weeks old, I bought the smallest dosages for each, and only put about a half tube on my cats and like 2 drops on my chihuahua. Almost instantly my chihuahua started to show signs so we washed it off her, she was shaking, foaming at the mouth her eyes were rolled back in her head, we washed it off her and she seemed to be ok after about 20 mins, I also washed my cats to make sure they wouldn’t get sick, well it wasnt soon enough. My 6lb cat started seizing and foaming twitching, was so scary to watch her as she was healthy and happy jut 20 mins ago, then my larger cat got really bad he was foaming, twitching, almost lifeless not breathing regularly, I bought the smallest cat dosage and split 1 tube between them. I was terrified, my cat layed in a box 3 days unable to get up and walk he messed all over himself. I thought he was dead I raised these 2 form the time they were 2 days old, and here he was at 2 almost dead because of flea drops. He managed to pull through, but he was never right after that, he had some neurological issues from it. My other cat an kitten were ok after we got them washed and the foaming stopped, but my poo chihuahua lost all of her hair, she looked pitiful with no fur and all the scabs, I wish this site was out before i bought this, I will never ever use Hartz or Sergeants again not even their shampoos!

I got my puppy from a rough situation. The owner was not taking care of her and about 20 other pitbull puppies. So as soon as I got her I took her to the vet. They gave her medicine for fleas and worms. It was NOT Hartz. When Lucy was about 14-15 weeks old, I went to the store and got her Hartz flea drops. This was in November of 2011. Later that night, I noticed my usual energetic puppy had been laying on the floor in the same position. She wouldn’t come to me and barely even acknowledged that I was talking to her. Her breathing was very rapid. She was shaking violently. I took her to her water bowl. She drank some and proceded to throw up everywhere. Then she started to drool heavily. Then she started having violent diarrhea. Her breathing changed to shallow. And sometimes she stopped breathing altogether. I called her vet who had emergency hours (his clinic was 25 mins away) and he said to bring her right in. We rushed her in. I told him, I thought it was a reaction to her flea drops. He assured me it wasn’t. He did tests for Parvo, even though she was already vaccinated against it. Every test he did, came up negative. She was at the vets for nearly a week. She almost died. After reading everything today, I KNOW it had to be the Hartz flea medicine. My vet had said that it wasn’t the flea drops, so I never thought about it again. After 5 weeks of fighting for her life before I got her, I almost lost my precious puppy to something that was supposed to keep her healthy. It makes me so sad that so many pets have lost their lives to this..My Lucy is a survivor, and I will continue to tell her story and how Hartz can kill.

My son rescued a little chihuahua that he found wandering about in a Houston parking lot this summer. He was trying to find the poor little guy a home when he used Hartz flea drops on him. The dog started siezing. The vet could not save him and he died. The vet reported that he sees this on a regular basis. I checked with my vet and she confirmed that this is a dangerous product.
Wish I could shout it from the rooftops…

Please hold the stores that carry these products liable!

Hartz is not the only one I blame for making my dogs ill. There has to be some blame put on stores who agree to carry this garbage and the sales people who tout it so highly. And holding a store and its employees liable was exactly what I did after my horrible ordeal.

My story begins at pet smart while looking for some flea control for my puppy. My local pet smart only carried Hartz. In reading the back of the package i discovered the minimum age for use was 12 weeks. The three puppies I was fostering were only 10 weeks. In speaking with a sales associate she assured me that if I split a whole tube for small dogs between three puppies, there shouldn’t be an issue and then went on to tell me she did the same when all her dogs were puppies. It made sense at the time that a third of a tube wouldn’t hurt my puppies when the size amount was correct and divided by three.

So as directed on the back of the package I applied a few drops on the neck of each one and rubbed it in with my fingers.. but instead of using a third of the tube for each puppy, to be on the safe side I used a half of a tube for all three instead of a whole one and proceeded to just throw out half the tube.

Less then twenty minutes later all three started to gauge and throw up. I panicked because at first i thought they were choking on something and after checking their throats thought maybe it was food poisoning and gave them some milk to pass whatever was in their system quickly.

Later that evening I began to gauge the same way and began throwing up all my food. It was horrible first night, me and three sick puppies. It was only at that point that i realized the only thing we had in common was hartz.

I immediately bathed all three puppies in a panic with dawn dish soap, and the although the vomiting didn’t stop completely, it subsided a bit. It took a week to have the puppies return to normal without throwing up every hour or so. I felt so awful but the worst part was, THEY WERE STILL INFESTED WITH FLEAS!

There is something very unsettling about the fact, the only thing Hartz wont kill is fleas. After I could manager to leave the house without throwing up, I immediately took the remaining two tubes to pets mart and confronted both the sales associate and the manager.

Luckily I stumbled on this site and printed out a list of stories. I handed them to both the manager and sales associate. The manager refunded my money but apologized that they couldn’t remove the item from the shelves, as it was head office who decided what products they carry. I called up their head office and threatened to sue them senseless.

The most insulting part of the whole ordeal though was the sales associate admitted she DIDN’T EVEN HAVE ANY PETS. She made up having dogs and ever even using Hartz.

I encourage all of you to begin complaining to all the companies that carry Hartz instead of Hartz themselves. Hartz doesnt care as long as they are making money but if a large company begins pulling the product because of too many complaints Hartz will notice.

Thank you for the chance to vent hartzvictims.org

A week ago, my grandmother came home with a kitten  she had received from a neighbor that was only about four weeks old.  We realized that Rocky, the name we decided to call the kitten,  hadn’t been weaned and went to find some kitten milk that  he could eat.   I went to Wal Mart to find some and bought the only product the store I went to had: Hartz Kitten Milk Replacement.  Almost 24 hours after his first bottle of this formula, he went into convulsions and was in almost a catatonic state until today when he started having convulsions and died.  He was perfectly fine being a playful and happy kitten that enjoyed being cuddled and held until I gave him that formula.  If somebody is reading this that is considering buying this product for your kitten, don’t do it!! 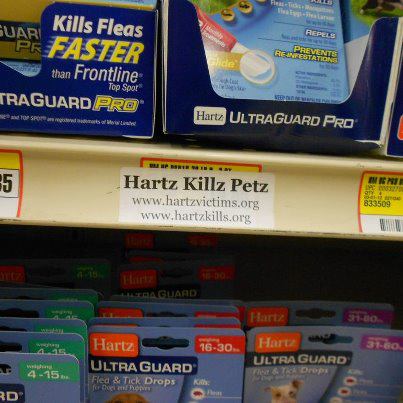 Hat tip to the Hartz Products are Killing Our Pets Facebook group.

I have used Hartz flea and tick drops on my 15 year old cat since we are in Texas. It was the last dropper in the box, Almost immediately after applying it my cat started to twitch. I figured it was because the oil was spreading. A few hours later I noticed that she was having problems walking, wasn’t drinking, and clinging to me like glue. I took her downstairs and washed her with dawn dish soap, and we went to bed. By morning she looked horrible. I gave her another dawn bath and started to do some research to find out what is wrong with her. I came across this site and became sick. On day two I had to syringe feed her water, 1 cc at a time. I also gave her baby food to try to get her to eat something. We are currently on day three and she has started urinating/having diarrhea on herself. She is now being play penned because I am afraid she will hurt herself. I called my vet and they said there is nothing they could do but wait it out. I am stuck between a rock and a hard place. Does anyone know how long until these symptoms will stop? (redness on the back, lethargic, trouble walking/weak, twitching, heavy breathing, incontinence, and restlessness)

i just now applied some hartz ultraguard plus on my cat Athena and she started squinting after i applied it…she is also drooling and scratching at her ears. i tried my best to wipe off what i could with a clean wet cloth and am watching her. i will never ever again buy this product because the reaction was immediate. i should have read reviews BEFORE and not after putting it on her.

6 deaths at the animal hospital I volunteer at alone! We need to do whatever we can to bring awareness. A woman contacted me, and she is writing an article about this product! Just pass this around, tell your family and friends, and blog about this like crazy! We can save lives! This is a lawsuit waiting to happen!